Slow down the pace of your Hawaiian adventure with a turtle-watching excursion. Turtle ("honu" in Hawaiian) encounters turns a vacation into an amazing experience with nature—and an even more Instagrammable beach adventure.

Wondering where to travel in paradise to find the majestic sea turtles of Hawaii? We've rounded up some of our favorite Hawaii islands that offer amazing turtle coves where you can spot these emerald-shelled wonders in the wild.

Located on Oahu's North Shore, Laniakea Beach offers such frequent sightings of the Hawaiian green sea turtle that locals simply know it as "Turtle Beach." This is an amazing spot to see gentle waves usher turtles to the shore for some sunbathing, and it's considered one of the most reliable turtle-watching spots in Hawaii.

Right outside the Outrigger Reef Waikiki Beach Resort is a notoriously great spot for viewing sea turtles. It's quite delightful to watch these creatures nibble on seaweed, and you may also be lucky enough to catch the serene scene of them napping on the beach here. The best times to spot them is early in the morning or late in the day.

For a fun way to see turtles on Oahu, book one of Holokai Catamaran's tours. A friend of the Outrigger ohana (family), Holokai Catamaran offers a Turtle Canyon Snorkel Tour that brings you around Diamond Head to swim in the presence of sea turtles, dolphins and the sea's other living treasures.

A perfect beach for barefoot walking, Keawakapu Beach happens to be a popular turtle-strolling spot, too. You never know when you'll see a party of green turtles emerging on this pristine beach that's famed for its tide pools. The great swimming and snorkeling that can be enjoyed here will leave you more than satisfied even if no turtles show up during your visit.

A calm and inviting beach, Maluaka Beach is hidden from trade winds by the peaks of Haleakala. That means that both humans and sea life enjoy peaceful waters. A dream for boaters and swimmers, Maluaka Beach also isn't only a great spot for seeing green sea turtles, but is also a top spot to see all kinds of fish, crustaceans and other sea life.

At Brennecke's Beach, seeing turtles come to feed at the lava shelf is common. This is a great spot for turtle watching from the shore. The rocky corners of this beach provide perfect viewing spots, and surfers can also combine a turtle-spotting day with a surf-trip day with help from the amazing waves found here.

Scenic and spectacular, A-Bay is a crescent-shaped beach defined by its white sand and fringed palms. The turtles that crowd this beach tend to favor its small coves when making their appearances. You'll love the privacy and intimacy offered by this turtle-friendly area. 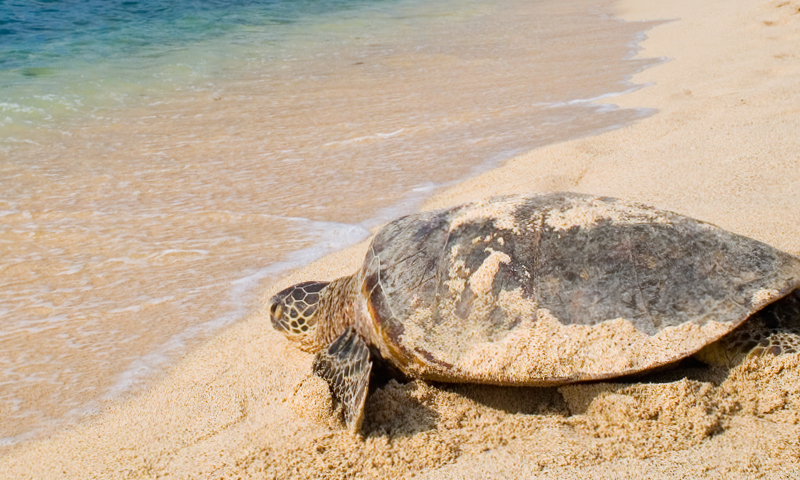 Because Hawaii has some of the best beaches for viewing these magnificent animals, you'll have a greater chance of catching a glimpse of these graceful creatures from a safe distance (or by venturing out into the water!)—the best time to spot sea turtles coming on the shore is midday, typically from around 11 a.m. to 3 p.m.

Both Outrigger Waikiki and Outrigger Reef Waikiki put you in close proximity to several spots on Oahu that are perfect for turtle watching. Visiting Hawaii (the Big Island)? Check out the Outrigger Kona Resort and Spa. This breathtaking resort is located on Keauhou Bay (a perfect spot to view manta rays!) within easy driving distance of A-Bay, one of our favorite turtle-viewing beaches on the list.